He was shown fearlessly and his wins include best brindle Staffordshire at Crufts 1936 and at Blackpool champ show. On many occasions he was placed best in show at the Staffordshire Bull Terrier Club shows held in Cradley Heath.

He had the proud record of taking more prizes in variety classes than any other Staffordshire Bull Terrier Living.

He was sired by fearless Joe who met his death at the age of nine fighting with a badger. His Dame been a well known bitch of her age Queenie.

Jim was owned in partnership by J & T Barnard. 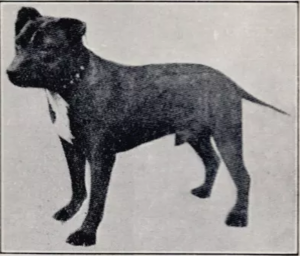